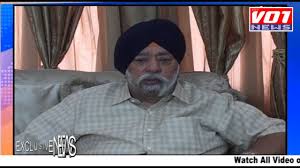 The former Delhi Sikh Gurudwara Management Committee President Paramjit Singh Sarna is anti-Sikh. He was the first person who tried to create hurdles in the construction of the 1984 genocide memorial inside Gurudwara Rakabganj Sahib complex in New Delhi.

Sarna were summoned to appear before the five Sikh head priests for creating hurdles in the construction of the genocide memorial inside Gurdwara Rakabganj Sahib
complex in New Delhi.

He had petitioned the Delhi high court, seeking a stay on the construction of the memorial inside the premises of this historic shrine. Thousands of innocent Sikhs were brutally murdered in 1984 on the directions of Congress party leaders.

The DSGMC, alongwith other Sikh organizations, had earlier sent
written complaints against Sarna to the Akal Takht. The foundation
stone of the memorial, dedicated to the riot victims of November 1984,
was laid by Akal Takht jathedar, Giani Gurbachan Singh, alongwith the
heads of the other Sikh Takhts.

It shows that Sarna has joined hands with the Congress party. Sikhs of Delh had gave their mandate against Sarna in the last elections and this time too he will face the same situation.